‘Farzand’ was a huge surprise hit of 2018. It redefined historical films for Marathi cinema. After a rich history of such films in the past, Marathi cinema had forgotten this genre & now thanks to writer-director Digpal Lanjekar this genre is back with all guns blazing! First it was ‘Farzand’ & now it is ‘Fatteshikast‘ which will reveal another brave chapter from Chhatrapati Shivaji Maharaj’s life & times.

The first reveal of the poster of ‘Fatteshikast’ was made yesterday on the occasion of ‘Maharashtra Day’ & along with that the makers are claiming that this film is based on India’s first ever surgical strike! As we all are aware that Chhatrapati Shivaji Maharaj used guerrilla warfare & hence his methodology was truly like a surgical strike! 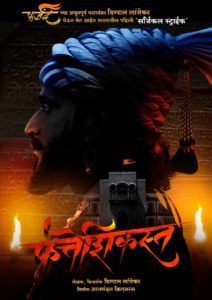 However it is yet kept a secret that which historical incident will be depicted in this film. But one good thing is that alike ‘Farzand’ Chinmay Mandlekar will be playing Chhatrapati Shivaji Maharaj’s role in this film! These are truly good signs for Marathi cinema & the audiences as we are finally getting the grand historical warfare movies and budget is no longer a restriction!