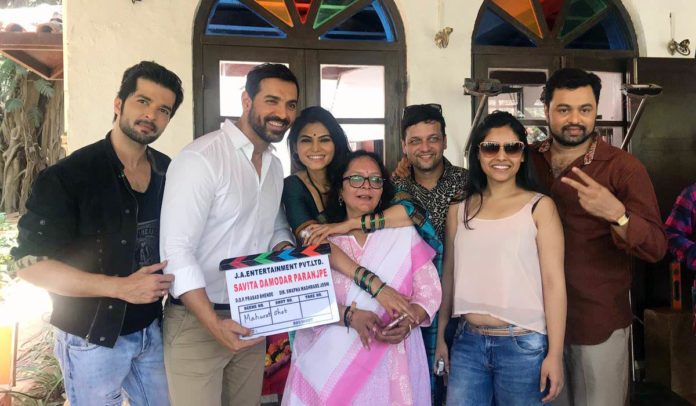 In the last few years we’ve seen many Bollywood stars turning to Marathi cinema, some of them as actors but most of them as producers. From Akshay Kumar, Ajay Devgan to Priyanka Chopra & now the latest addition to this prestigious list is John Abraham. John Abraham turned producer with a social comedy ‘Vicky Donor’ in Hindi a few years back & since then he has produced different kinds of films that include ‘Madras Café’, ‘Rocky Handsome’ & ‘Force 2’!

Now John is entering Marathi film industry as producer with Swapna Waghmare Joshi directorial ‘Savita Damodar Paranjpe’. The film stars Subodh Bhave, Rakesh Bapat, Trupti Toradmal, Pallavi Patil & Angad Mhaskar in prominent roles. This film is based on a popular play of the same name. This film is supposed to be a psychological thriller. It’ll interesting to see director Swapna Waghmare Joshi venturing into a different style of film post a successful mad comedy like ‘Fugay’.

John Abraham met Swapna Waghmare Joshi at the trailer launch event of ‘Fugay’ & expressed his wish to work with her in the future. And now we are seeing them collaborate for ‘Savita Damodar Paranjpe’!