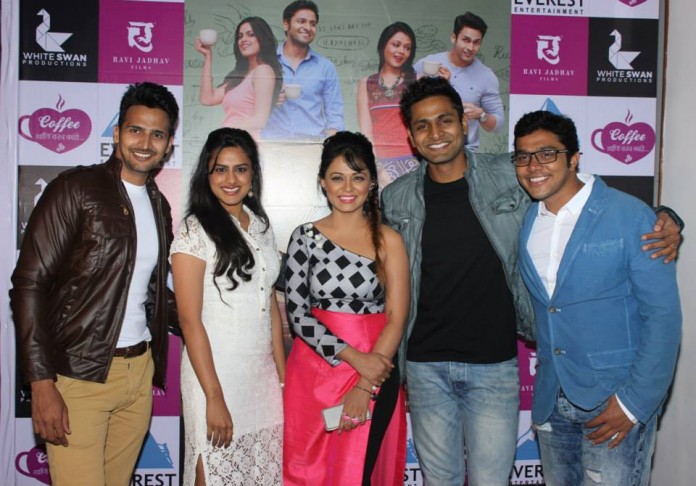 Directed by debutant Prakash Kunte features lead pair of Prarthana Behere and Vaibbhav Tatwawdi, ‘Coffee Aani Barach Kahi’s’ music has been composed by Aditya Bedekar and the lyrics have been provided by legendary Mangesh Padgaonkar and Yogesh Damle.

The event was a star studded with the Marathi industry coming together in support of the film. In addition to Sanjay Chhabria, Ravi Jadhav, stalwarts of the Marathi film industry were also present along with the complete cast of the film including Prarthana Behere, Vaibbhav Tatwawadi, Bhushan Pradhan, Suyash Tilak, Neha Mahajan, Shashaa Tirupati and Aditya Bedekar.

The highlight of the evening however, was the unveiling of the special promotional music video of the film and live soulful performances by Shasha Tirupati on the unplugged version of ‘Rang He Nave Nave’, leaving all those present mesmerized and spellbound.

The ‘Coffee Aani Barach Kahi’ album contains three tracks, one being a romantic number ‘Rang He Nave Nave’, the other ‘Tu Astis Tar’ being a sad romantic number and the last ‘It’s Awesome’ being the promotional track. The Glimpses of the song on the social media have already garnered significant traction and curiosity.

Commenting on the film’s music, composer Aditya Bedekar said; “Prakash was sure that they wanted only two songs with all tracks having a very specific purpose. I have tried my best to ensure that the songs not just take the film’s story and mood forward but are of a high hummable and lyrical quality.”

Talking about the launch, Sanjay said; “We were quiet excited when we heard the script and instantly we decided to back the film. The songs and the music have also shaped up fantastically and apart from their high melodic, lyrical and music quality, they add great depth and meaning to the film.”

“I really like all the songs from the album, but the one which stands out for me is ‘Rang He Nave Nave’. Shasha Tirupati’s vocals have really added great feels to the song..” added Ravi.

Coffee Aani Barach Kahi is an unusual yet very relatable love story that revolves around Jaai (Prathana) a typical filmy girl and Nishaad (Vaibhav) for who love is just impossible.  The story then takes us through a series of twists and turns laced with comedy of errors driven clean humour brining us to the ultimate question of would they eventually get together It is a sweet romantic film which will tug your heartstrings in all the right places and leave you with a smile when you finish seeing it. The film has already generated buzz on the various social media platforms.