One of the most unique pairs of Marathi cinema writers Ambar Hadap & Ganesh Pandit are coming together again. After giving us masterfully written films like ‘BP – Balak Palak’ & ‘Yellow’ now they are bringing us a new Marathi film titled ‘Andya Cha Funda’. Their trademark quality of mixing content driven cinema with entertainment will also be present in ‘Andya Cha Funda’. Santosh Shetty is the director & the story writer of ‘Andya Cha Funda’ whereas Ambar-Ganesh have written the screenplay & dialogues for the film.

Both Ambar & Ganesh said that they enjoy working on interesting films, it doesn’t matter if they work less they make sure that film has something new about it. ‘Andya Cha Funda’ tempted them to write the screenplay & dialogues as the idea itself is unique & new. 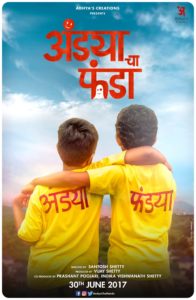 Produced by Vijay Shetty under the banner ‘Adhyaas Creations’ & co-produced by Prashant Pujari & Indira Vishwanath ‘Andya Cha Funda’ is a film based on children. This story is of two close friends & their journey, the fun they have, they puzzles they solve & the rest of their adventurous journey. This film releases on 30th June all over Maharashtra.