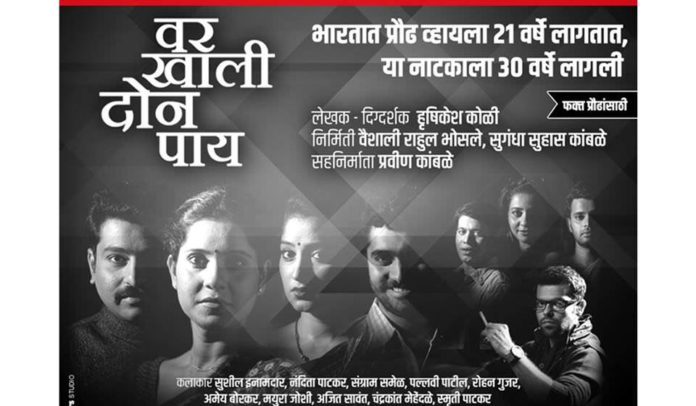 The grand premiere of ‘Var Khali Don Pay’ was recently concluded in the presence of countless Marathi & Hindi celebrities. The play is written & directed by acclaimed young playwright Hrishikesh Koli. It is based on the popular play from the 80s ‘Purush’ written by Jaywant Dalvi & starring Nana Patekar, Reema Lagoo.

This play takes the basic plot points & characters from the old play & makes changes according to today’s times. A play that interrogates the mentality behind ‘Rape’ & domestic violence has some jaw dropping moments. Overall the audiences would be shocked in a pleasing & enlightening way throughout the runtime of the play.

The whole boundaries of theatre in Marathi are broken with ease by Hrishikesh Koli & his team. A stellar star cast that includes Nandita Patkar-Dhuri, Sushil Inamdar, Rohan Gujar, Sangram Samel & Pallavi Patil has given truly rocking performances. Previously the play had been performed on the experimental stage, but now with the backing of Digital Detoxx who are now presenting this play, the play will be performed on a larger scale.This play is produced by ‘Rangalay’. The new presenter of this path-breaking play is Chaitanya Akolkar & Vaishali Rahul Bhosale, Sugandha Suhas Kamble are the producers while Pravin Kamble is the co-producer of ‘Var Khali Don Pay’.