Synopsis : 20 Mhanje 20 (Vees Mhanje Vees) is an Underdog story with a different spin. Shailaja is a young girl studying in the city. Her father has been an educationist and has been running a school in their village for a while. However the school has been shut due to his illness. She resolves to go to the village, re-start the school and realize her father’s dream of ensuring that it runs successfully. What follows is an inspiring journey through the trials and travails of ensuring that a school can impart meaningful education, engage its children in meaningful academics and sustain a consistent attendance in a country ridden by poverty, caste, gender, religion and many other divisive vices.

20 Mhanje 20 is Shailaja’s story of striving to realize her father’s seemingly impossible dream. Its the story of rural India and its under privileged children who have always and still continue to be on the fringes of the larger plans of nation building and development. 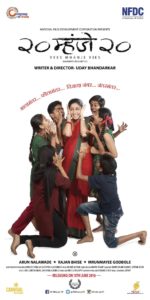