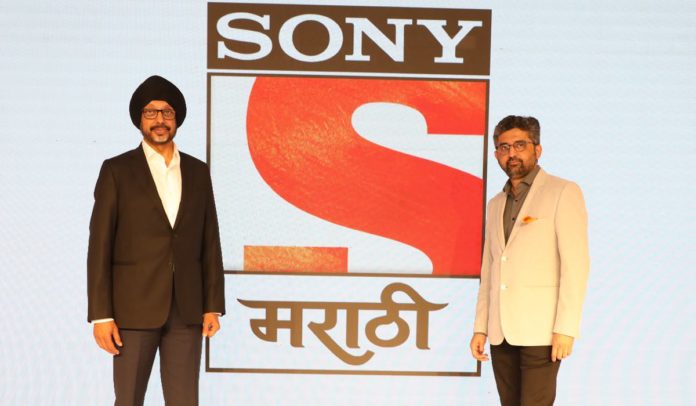 Sony Entertainment is a trustworthy brand in the history of Indian T.V. industry. Almost after 2 decades of their entry into the industry, they are now entering the Marathi entertainment industry. And they had a grand launch party at the lavish JW Marriot hotel. From the meaning behind their logo to the objectives they have in mind were spoken about by Ajay Bhalwankar (Business Head of Sony Marathi).

Popular actor & lyricist Jitendra Joshi was hosting the event & was introducing the shows one by one. From a romantic serial like ‘Julta Julta Jultay Ki’, ‘Duniyadari Filmy Style’ a story of a struggling actor who leaves Mumbai & decides to make a film in his village with the help of his villagers, A story of a weird marriage between a boxer girl & a singer boy titled ‘Saare Tujhyachsathi’. A dance reality show featuring countless celebrities, ‘Maharashtracha Favorite Dancer’ hosted by Pushkaraj Chirputkar & the super judge being Supriya Pilgaonkar!

Jitendra Joshi apart from being the host of the evening also revealed that he himself will be a part of a unique show on the channel titled ‘Garja Maharashtra’. This show will showcase the folk culture & traditions of Maharashtra & the will be a tribute to the legacy of Chhatrapati Shivaji Maharaj & their forts! The show’s telecast will commence from 19th August at 7 pm with a grand award show, 55th Maharashtra State Marathi Film Awards! The whole entertainment industry will in this way wish Sony Marathi a successful future.

So don’t forget to tune into Sony Marathi from 19th of August!