Prathamesh Parab is back. His latest release “Urfi” is ready for the release. The first teaser of this film has been released on various platforms of social media. The film is written and directed by Vikram Pradhan. The ususual title “Urfi” has a tagline “Anything for love”.

The trailer showcases Deva- a role played by Prathamesh in a very cool street smart look. Though the trailer is just 40 seconds, it increases the curiosity of the viewers. 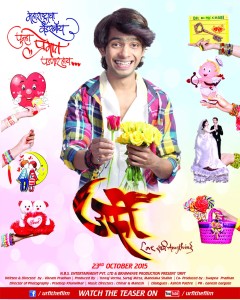 It may be recalled that the female lead for this film was searched through a Facebook page competition. The auditions were held in Mumbai and Pune in April. However, audience is yet to take a glance at this newcomer who will debut against Prathamesh.

The film is a romantic comedy with a small dose of thriller. The other star cast of the film is yet not been announced.

“Urfi” will release on 27th November 2015 all over Maharashtra.