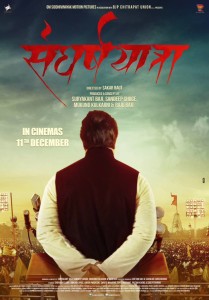 The movie is about the social leader of Maharashtra who worked hard for people and he was a spokesman for the downtrodden masses of Beed. Here is the first teaser of Sangharshyatra. The screen play and story of this movie is written by Viraj Muley and Vijay Gharge.

Actor Sharad Kelkar will play the role of Mr. Gopinath Munde, along with Sharad, Girish Pardesi, Shruti Marathe, Omkar Karve, Deepti Bhagwat, and Preetam Kangne are also playing the important role in this movie.
This movie is the tribute to Mr. Gopinath Munde and will release on 11th of December.