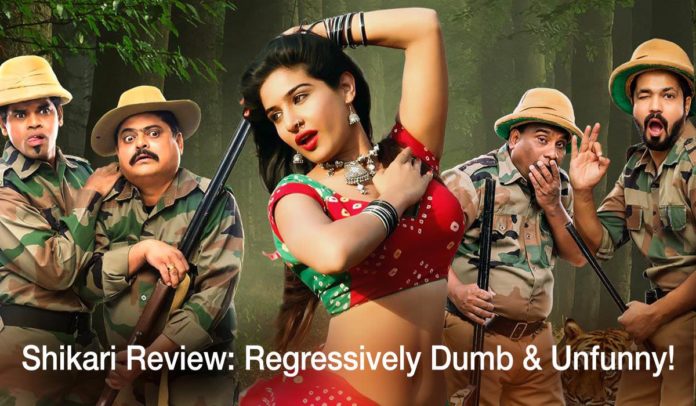 Marathi cinema in the 70s & 80s went through the most ‘commercially’ successful phase because of a single man ‘Dada Kondke’. We’ve grown up hearing his legendary tales of how the great Raj Kapoor used to make sure if there isn’t a Dada Kondke movie in theatres before releasing his films. There was a distinct ‘double meaning’ humour that he introduced us to & made it work for a audience that were only interested in having a good time in theatres especially in the rural parts. Since then whenever anyone has tried a hand at this kind of humour has failed miserably or has been easily discarded as cheap ‘b’ or ‘c’ grade stuff. Even there has never been the same response from the audiences.

Viju Mane directorial ‘Shikari’ proudly promoted itself as a film that endorses the same ‘Kondke’ brand of humour. The truth is Shikari’s humour doesn’t really belong to the same brand, in fact it doesn’t even belong to any brand of humour. A few adult jokes here & there, some slapstick humour here & there (which doesn’t work) but the film is more of an erotica especially in the first half. An erotica that is so deliberately designed which doesn’t have any logical backbone of it’s own! While doing so it makes a fool of an aspiring actress played by Neha Khan. Her character of ‘Savita’ has been exploited in the story of the film by opportunist men. Sadly her character in the scheme of things of the actual film too has been exploited. How dumb can her character be? She never understands if a man is lusting for her!

But then the other characters of her husband (Prasad Oak), Phulwa (Mrunmayee Deshpande) too are equally dumb. Whereas Suvrat Joshi, Bharat Ganeshpure & Siddharth Jadhav play opportunist men who only care about lust, this is the entire range of the characters in the film. The other supporting characters played by Bhau Kadam, Vaibhav Mangle & Kashmera Shah are completely irrelevant to the film. Again Kashmera Shah has been unnecessarily exploited as an object of ‘lust’.

There are two films that are mixed up together here. One is a straightforward copy of the 80s Hindi film ‘Anubhav’ that starred Padmini Kolhapure & Shekhar Suman. A childish girl who doesn’t understand a bit about post marital proceedings between a husband & wife (though here, one fine day just one watch of an adult film all of a sudden makes her matured!). The other film is about ‘casting couch’ in the film industry. And the ‘Shikari’ is a metaphor for all lustful men! The irony is that the first half feels targeted towards these exact Shikaris among the audiences. While the second part of the film has mindlessly dumbed-down Savita’s character to make her a victim to give us a message.

Neha Khan though thoroughly exploited in the plot of the film & in the actual film is a really effective actress. We hope she finds good films. Mrunmayee Deshpande usually entertaining to watch is ineffective here. Suvrat Joshi is good in his part but that doesn’t save the film in any way. ‘Shikari’ is a crude film that is supposedly about the exploitation of women in today’s world but ironically ends up exploiting the female cast of the film! The makers believed it’s a commercial film & not for an intellectual audiences. If it ends up becoming a super-hit, that would surely say a lot about today’s society of our’s with countless Shikaris roaming free.

‘Shikari’ could entertain only those who watch films to satisfy their lustful urges, for the rest this film will only end up being highly offensive as it was for me.