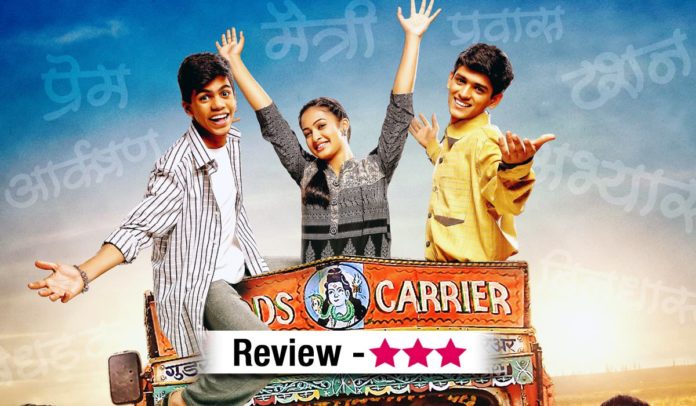 Many a times we have a tendency of typecasting films. Very few times we watch a film with a complete clean slate. And we recommend that watching Kaul Manacha with a complete clean slate can be an enjoyable experience. A month back came another film based in a boarding school & revolving around adolescent kids. It was pointless, silly & a technical disaster unlike this one. Yes even technically Kaul Manacha is acceptable!

The story belongs to Raj (AshutoshGaikwad) who is an out & out Bollywood addict. Just like Om PrakashMakhija from ‘Om Shanti Om’ but Raj is still in his earlier years. He is studying in a boarding school. His father passed on this ‘filmy’ legacy to him. So Raj is now all set to live his romantic dream. The first woman that blew his mind is not surprisingly his teacher Miss Hema (AmrutaPatki). Just like a true blue filmy maniac he imagines her in chiffon sarees& lip syncs to a truly beautiful romantic number (‘SundariTu’ is truly beautiful & you’ll keep humming it for a day or so after coming out!) And then with his contemporary Ritika (GirijaPrabhu)! A new admission in the school!

Ok we admit the plot is predictable & has been repeated many times in recent past but yet Kaul Manacha has a novelty factor. The film is genuinely funny in some parts & well even unintentionally funny at others. But we are bought into it, we are engaged, we are bothered about the three kids (Raj, Ritika & Prathamesh) who ran away from the boarding to get their questions answered! (the ‘Kaul’ part).

In the first half Raj is excitingly a bit of an Anti-Hero, but the point the makers wish to make is quite opposite of it. The reason we are giving thumbs up to this slightly immature treatment is the fact that throughout the second half Kaul Manacha keeps making essential points. They don’t become preachy as well! They have used the available plotline itself. The second half is quite wholesome were nothing is hurried to throw the message on our face. The lead kids Ashutosh & Girija have performed really well with interesting contributions from Rajesh Shringarpure & Kamlesh Sawant.

Yes there are quite a few emotionally melodramatic moments which could have been avoided, but still Kaul Manacha manages to strike a chord! The writers Bheemrao Mude (also the director) & Shweta Pendse (who has also acted in the film, a familiar face on TV) deserve credit for being pretty sure about exactly what they want to say & managing to keep the process engaging.

However we wish one day we will be ready to accept a complex anti-hero without any justification by the end of the film. We are not asking for glorifying such characters but a sensibility to accept them the way they are without thinking even once about the negative impact it might make on the younger audience because it doesn’t!

The length of the film is nearly two hours & still we felt it could have been a bit longer provided they had a bigger outdoor budget.The dialogues could have been simplistic as at times they really get on your nerves. Two out of three songs are enjoyable & well essential to the film. Better direction could have made Kaul Manacha the surprise good film of the year, but still we aren’t complaining!

Don’t go on the publicity stills or other promotional content & activities coming at your way about this film, Kaul Manacha will surprise you!