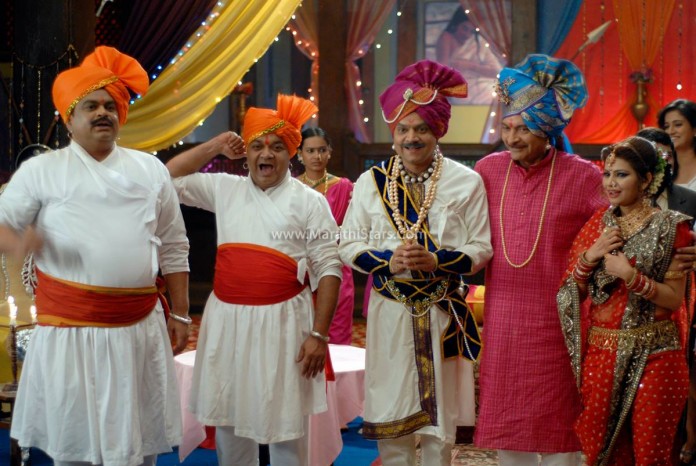 After a national award winning film ‘Dhag’, director Shivaji Lotan Patil is ready with his next ambitious project ‘Rajwada’. After successfully trying his hand in tackling serious subjects, Shivaji is now all set to entertain the audience with his first out an out comedy film ‘Rajwada’ which will hit theaters on 8th August.

Like his past films ‘Vavtal’ and ‘Dhag’, ‘Rajwada’ also has a strong social message. However, this time Shivaji is presenting it with ample doses of comedy. “It’s like sugar coated medicine. You have to reach the masses to effectively convey your message and comedy is the best vehicle,” says Shivaji.

‘Rajwada’ stars screen award winner Mangesh Desai in a lead role. After winning hearts with his sensitive portrayal of a puppeteer in award winning ‘Khel Mandla’, Mangesh Desai is back to the genre he is best known for i.e. comedy. Megha Dhade is playing his love interest. Leading comedians such as Abhijit Chavan, Kishor Choughule, Arun Kadam and veteran late artist Kuldeep Pawar are lending able support to Mangesh, Medha and director Shivaji Patil in their endevour to entertain people.

‘Rajwada’ tells the story of an ex-king who after independence has lost his kingdom. Due to his extravagant lifestyle, he has gone bankrupt and his ‘Wada’ is up for sale. In a desperate bid to save his only possession, the ex-ruler and his family go on spree of lies, creating many comical situations and total havoc in the village.

The film has been written by Arvind Jagtap. Music is by Vijay Gatlewar. Produced by Deepak Parkhe for Superpower Entertainment, ‘Rajwada’ is slated to hit theaters on 8th August.