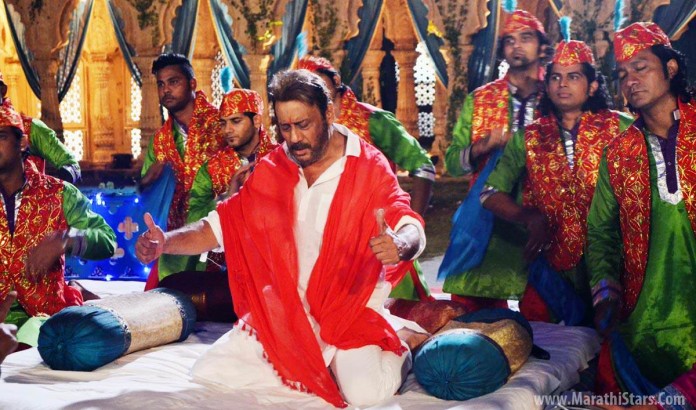 There are a lot of devotees of Gajanan Maharaj in Maharashtra and for these devotees producer Deepak Gore and director Pitambar Kale are bringing to the audiences, the devotional film “Shegavicha Yogi Gajanan”. Based on the greatness of the saint, the film had recently filmed a quawalli picturized on Jackire Shroff with the words ‘Tu Hi Taj Tu Hi Sai’ on which Jackie danced like in a trance.

The song was choreographed by Bhoopi Das. The executive producer is Anoop Gore. Jackie Shroff expressed his pleasure on getting an oppurtunity to dance in a Marathi film after a long time. The lyrics of the film are by Pravin Davne and music by Nandu Honap. The makers of the film consider their effort to be a positive step to understand the greatness of Gajanan Maharaj through this bio-pic. The film stars Jackie Shroff, Sanjay Khapre, Deepali Sayeed, Milind Gunaji, Bharat Ganeshpure, Prema Kiran, and Poonam Vinekar among others.