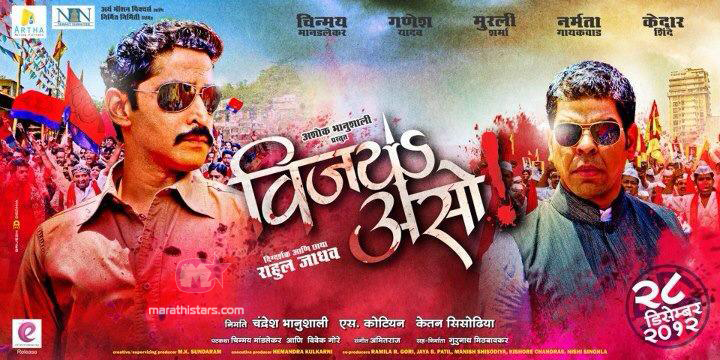 Produced By : Artha Motion Pictures & Nirmit Nirmitee
Directed By : Rahul Jadhav
Written By : Chinmay Mandlekar
Starring (Cast): Chinmay Mandlekar, Ganesh Yadav, Kedar Shinde, Namrata Gaikwad, Amita Khopkar,Janardan Parab,Priyadarshan Jadhav,Rohan Gujar,Mangesh Kawade,Vishnu Kokane & others….
Studio : Artha Motion Pictures & Nirmit Nirmitee
Screenplay By : Chinmay Mandlekar
Genre : Political Satire
Release Date : August 2012
Plot Outline : “Set yourself free,the world is not going to end but it is going to change.
It will change for the better,we are the driving force of that change…..”
Story : The story revolves around Shankar our Protagonist. Shankar resides at slum area. Working for Prakash Jadhav (Forest Minister) as a karyakarta for his political party. Shankar also takes contracts of providing mob for Morcha, Dharana, and other agitations, sometimes it’s a social work but mainly it is his business, daily bread butter for his area people who loyally work for him.

There are varieties of humorous characters revolving around Shankar. “Chintu Kaka”, once a small time extra actor in films, a father figure to Shankar. “Awaa”, Shankar can rely on her anytime for any work, a loyal worshipper of Prakash Jadhav & Shankar. “Dumbbell”, his name says everything, a wannabe bodybuilder (with no built of course) carrying dumbbells with him all the time. “Shakuntala”, Awaa’s daughter & Shanker’s love of life. Works as a helper in a beauty parlor, but her dream is to be a beautician some day.