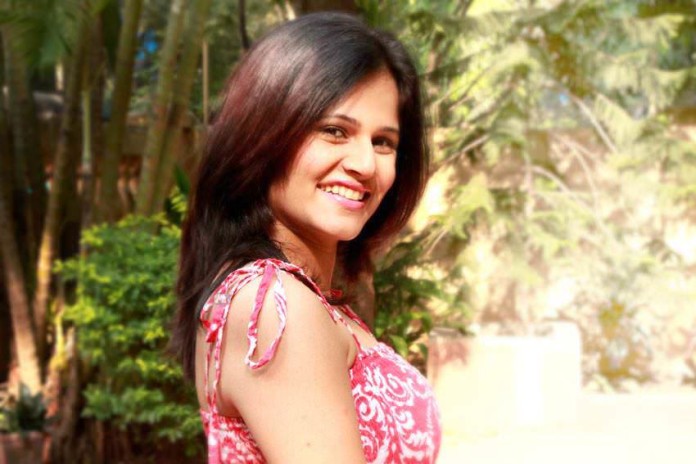 She is a terrific combination of a talented actress and a great director. Daughter of an actress and a writer, Manava Naik has always been choosy about her roles and given something more to her every role. After doing many shows on National Television, Manava acted in several Marathi films like Shahanpan Dega Deva, Fakta Ladh Mhana, Kaksparsh, No Entry Pudhe Dhoka Aahey, to name a few. A film school graduate from US, she made her debut as a director with Por Bazaar, a powerful film about child-trafficking.

Her latest film as an actress “Dhinchak Enterprise” is releasing on 21 August. Marathistars.com spoke with Manava about her role in this film. Manava also speaks how the changes in Marathi cinema will affect the industry in the future.

Tell us more about your role and the film Dhinchak Enterprise?

Dhinchak is about today’s youth who wants to make more money in less time. It is not like they don’t want to do hard work, but they prefer shortcuts. In the film you will see two salesman struggling with their corporate life, however a turning point comes and they get sudden opportunity to earn vast amount of  money in short time. Whenever you get lot of money there is always a duality and dilemma about good and bad. So eventually the story is about their conscience and decision between these two.

The girl in Dhinchak is more career-oriented than what I am in real life. I am actually a laid back type of a person. She is a very sweet simple girl next door type. I think every girl of today’s generation can can identify with such characters as rat-race and competitive corporate life has become part of our lives.

You are being paired with Bhushan for the first time. How was the experience of working with him?

Ans: Bhushan and I were not very good friends earlier but we had a bunch of common friends. We started off as just acquaintances but while working for this film we became really good friends. He is a very co-operative and warm co actor. On film sets you are spending so much of a time such friendly relationships get developed and I think good chemistry between us can reflect on the screen as well. 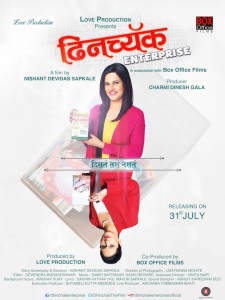 The film stars Meenatai as Bhushan’s mother! She will be your mother-in-law in the film. How about that?

Ans: Isn’t it amusing? When Nishant came to narrate the script, he met my mother. So I think he had this idea of casting her as Bhushan’s mother that time only. Surprisingly he cast my mother as Bhushan’s mother and Ashwini Ekbote is playing my onscreen mother. Surprisingly, whenever I have worked with mom she didn’t play my mother. In Abhalamaya she didn’t play my mother. We both did one episode for Pratima Kulkarni way back in the 90s, there also Savita Prabhune played my mother and not her. She has played mother in so many characters; all her onscreen boys and girls are excited about working with her. However, nobody seems to cast her as my mother.

Working with her is always a pleasant experience. When we both are working in the same project we are two completely different individual professionals. Even at home she doesn’t mother me too much. Similarly, she will treat me likeany other co actor on the sets.

Manava, you have also directed a movie, so while working as an actress, do you pay attention in the direction department?

Ans:. As an actor I have always believed that director is the captain of the ship. Sonali kulkarni told me stayed with me as an actor when you feel something, you express it on the sets immediately. There is no point in regretting afterwards. I always try to follow this and while doing a scene if I feel about it, I say it to the director.  It is always good to voice yourself, which I always do. But it is very important to put away your personal beliefs and follow the director’s instructions blindly. It is very important for an actor to go by director’s view because he has an overall perspective of the product where we actors might be thinking from our point of view only.  So I think should be open communication, at the same time respecting director’s view. When I was shooting for Dhinchak post production for Por Bazaar was going on simultaneously. So, I would share my experiences or problems with the director and then it helped us to get things better while shooting.

Where do you find yourself more comfortable as an actress or as a director?

Ans: Being a film maker is always pressure-oriented work. The levels of stress and chaos are very high and hence it becomes more of a hard work. When you are in front of camera, you have to concentrate on looking good and performing well. However, I love both these jobs. After directing I feel that now I just need to work in a nice movie, and get relaxed. Then, I feel like I am ready for my next adventure as a director.  So it is a vicious circle for me, but I enjoy it immensely.

So, you are ready for your next direction? Future projects?

Yes, currently we are working on Script. The screenplay will be ready by end of the month. The film will go on floors by the end of the year.

Will you be acting in it?

No, the cast is yet to be decided, but I will not star in it for sure. I am acting in other films. Shoot is almost over for Girish Kulkarni’s Jau Dya Na Balasaheb. I am also currently rehearsing for a play as well, can’t say much about it before official announcement.

You have done serials, Theatre and films. How is the journey so far?

Ans: I have always looked at my profession as something I like to do rather than a job. Since it always been love-oriented and passionate I have always enjoyed every moment of it. I prefer projects which I really wanted to do. I never did anything because I just had to do it to pay my EMI. Money and fame are of course there, but for me job satisfaction is what matters at the end of the day. Overall it has been a great happy journey. Obviously with ups and downs, but it is still very much enjoyable. After all these working years, I realize that be it, success or failure you should be able to handle it. There are moments of high success and high failures but these are just passing moments. How you handle these moments define you as a person. On either sides of these there depression and over-happiness, but your personality can be shaken. So it is very important to be rooted and loving your work.

It is said that Marathi film industry in changing radically. What do you think about these changes?

Ans: I think, in Marathi cinema we are creating a bubble for ourselves. We are talking about being golden age of Marathi cinema, awards, acclaims and recognitions, but what is happening in reality? More than two Marathi films are releasing every week- but what about the audience? There are five fantastic films every year, but there are more than fifty no so good films. Some of the films are getting good promotions, but many films are unattended and hence I fear that this bubble might burst. In the end, getting subsidy and making a film just for the sake of it can be a killing story for all of us. We should be able to make our films more content-oriented than making them market-oriented.

Everybody is looking at Marathi cinema with a different eye which also increases our responsibility of the industry to give good products.

Out budgets are increasing and production values are getting fine. Do you think we are ignoring the content of the film?

Ans: For making a good film, everybody’s intention should to sell the good content. We are trying right from the writers to actors to technicians to give a good content only. My point is if we are getting better technical team to make the film, unfortunately we have only Maharashtra state watching the film. So even if I hike my budget five times and decide to pay best cameraman more and increasing everything to a grand level, but problem lies with the fact that in Maharashtra there are only x number of people and out of them only y number of people will come to watch the film so my revenue is not building. We bring brilliant content with excellent technician but we need audience.

How are we going to increase the number of audience other than Marathi speakers?

Ans: I have two perspectives for this. If you look at south Indian film industry, everybody watches their own films. They do not even allow dubbed movies. In Maharashtra out of ten hardly two people are watching Marathi cinema. We should make more and more people towards theatre to watch the film. The films should reach in Marathi speaking pockets globally. Second part is Marathi cinema should be so good, that it should be viewed by various language speakers as well. That is why we should focus on reaching out and creating the curiosity for the film. But only promotions will not help. Our agenda should be to make good films; if we concentrate on just selling the films then we might die as an industry.

Where do you see yourself in the next five years?

Ans: I don’t have goal based conditions and ambitions. I am more interested in being happy and enjoying every phase of my life. I just wish to have good work and good life. I do not want to keep running in a rat race, but desire for moments making me enjoy the happiness of my life.

Tell us about your Fitness Mantra.

Ans: I don’t really follow any fitness mantra. I tend to eat less in the night, and prefer having heavy breakfast. My bedroom in on the third floor, and hall is on first floor, so going up and down on staircases becomes my workout regime.

What you like to do when you are free?

I love to travel. I make it an attempt to travel to one foreign country for the past six-seven years not just a pleasure trip, but understanding the culture by visiting museums, artiste villages. I do some free workshops for not so priviledged people and screening films for people in my locality. I also like to cook. I am a non-vegetarian so I like to prepare typical Marathi style Chicken and fish rassa.

Manava, it was really nice speaking with you. We wish you every success for Dhinchak and other future project. Talented artistes like you always make us proud in our Marathi cinema.