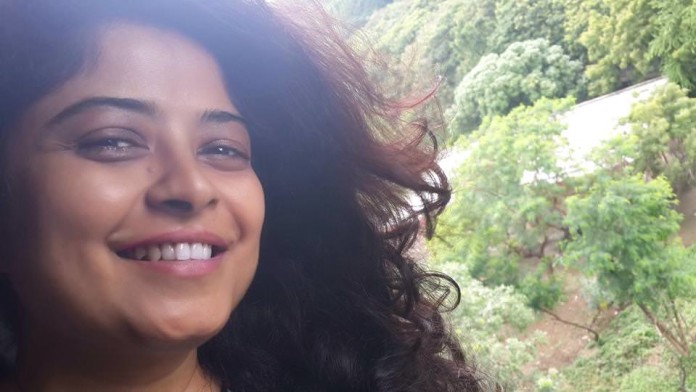 One of the leading film writers in India today, Manisha has scripted films like Malamaal Weekly, Dhol, Bhool Bhulaiyyaa, Billu, and Bumm Bumm Bhole, among others. In 2013, she wrote her first Marathi film Prem Mhanje Prem Mhanje Prem Asta. Shutter is the second film in her native language and for which she won the Best Screenplay Award at the Mumbai International Women’s Film Festival.

Marathistars.com spoke with this writer to know more about films and writing thoughts.

Your latest release in Marathi was Shutter. Audience liked this movie very much. This is a remake of a Malayalam film. What was your thought process while writing screenplay for this film as cultures are different, and sensibilities of audience are different.

The original shutter and Marathi Shutter are not exactly same.  Obviously the cultural differences are there, but I have always thought that such cultural differences are always superficial. All human emotions palates are universal. Hence, we can relate with Shakespeare, we enjoy films in Spanish or Swedish languages. Every story from different culture comes in front of us in different avatar. However, stories amd human appeal is same everywhere. The trick of the craft of adaptation is lies in falling in love with the original. Mostly what people do is they look at the original as stepping stone. This is a successful film and I have purchased right, now let me make something out of this is their thought process. For me, it is always loving the original and then adapting it into something else. I erase all the makeup of this cultural context manner gently and expose the story beneath this layer. For Shutter, I saw original film many times. You have seen original Shutter so you know that approach of this film is like a very long descriptive but enchanting novel. Just like Rundhati Roy’s God of Small things, this film has its own pace and own world. If I have to describe you this film visually, then I will say when a silk scarf falls to the ground in a very slow motion, that image is about Shutter. This has enigmatic beauty; it pulls you in its world. But it has own risk also, when I am making a film for masses, I wonder whether everybody will have patience for such film. Original shutter had multiple dimensions, but I had to figure out which dimension will appeal to my audience, whether it is the angle of prostitute and Rickshaw driver, or the director’s angle as Mumbai is a filmy city. However, for Marathi audience father and daughter angle will definitely appeal.. Through this angle indirectly we are giving a message about not to hasten girl’s marriage. The focus of the film was slightly changed to father and daughter angle while adapting in Marathi.

Your first Marathi film was Prem Mhanje Prem Asate with Mrunal Dev Kulkarni. How this journey of Hindi to Marathi started?

Most people were unaware of my Marathi background in the industry. I had done Marathi theater and published poems in Marathi, and I had written an experimental play in Marathi, I had performed in Prithvi as an actress. As I was too busy with my Hindi work, probably nobody thought I will write in Marathi as well. I met Mrunal Kulkarni, director of Prem mhanje prem asate few years back. We had a a nice interaction and she told me if she would make a film, she wanted me as a writer. I said I would be delighted to write a Marathi film as this is my mother tongue and this language has always been closer to my heart. So we worked together.

Hindi gives you a different type of kick while writing as you are aware that whole of India will be watching this film. Reach of Hindi films gives you mental kick. Pressures are more, the performance anxiety are more expectation from everybody are very high. BP kaafi badhata hai. But writing a Marathi film, the experience is quiet reverse. It is as soothing as a cool breeze. It calms my heart and my soul.

How and when you decided to become a writer?

I am come from a simple middleclass family in Nagpur with no connections in the film industry.  However, writing runs in my family. My maternal uncles are poets and scholars in Marathi literature. Though, I started writing poems when I was young, I never thought that I will become a writer.  I wanted to become an academician or psychological councilor. I came to Pune to complete my post graduation in clinical psychology.  But after my masters I failed to get good ranks for PhD  and had to take my NET SET exams again. Someone from Nagpur was working as an associate director in films suggested me to start working as an assistant director during this gap. As it was just for six months, I thought that lets give this a try. I started working with Priyadarshan. As my Hindi has been very strong, dialogues used to come very naturally to me so while Priyadarshan and Neeraj Vora used to work on dialogues or screenplays I started giving some suggestions. They even started to incorporate me in this pre-production team. Neeraj advised me rather than just putting suggestions I should start writing by myself. Later Neeraj became busy with his directorial ventures so Priyadarshan told me now it is time to start writing individually. With his encouragement I became a writer. I never went back to psychology or my exams.

What is your creative process while writing a screenplay? Do you write about how to place the camera and other things? How do you envision your characters?

I don’t really think about camera angles or how actors will perform a particular line as these departments are specialized departments. If I write camera angles in my screenplay I am trying to infringe the territory of director and cameramen. This is again very individualistic. Some people might like help my writing is providing but some people may not like it. My focus is always should be on screenplay or dialogues.

However, I do mention look and makeup of the charecters, as they are part of my imagination. For writing Malaamal Weekly’s Baj Bahudur character, I wrote the style of his makeup and shared it with the director and makeup department. Like for Herapheri Priyadarshan has used very thick glasses for Paresh Rawal’s character, because he cannot see properly is a part of the script.

Priyadarshan has a very unique style of making films, His films are not just about comedy they are much more than that. What is your thought process for his films?

Apart from writing his films I have also worked as an assistant director to Priyadarshan. My school of film making is clearly derived from his style. Whenever I am writing, I just cannot write for the sake of comedy. Everything should have a purpose, and that purpose is story- telling. The story should have some human touches and it should not look like patch work. Every small detail should be weave together to make a fine-looking quilt.  Comedy works only when it is integrated into a storyline and characters should be a fundamental part of it. Adding a chuktula here and joke there does not make sense in the end.

How important is it for a writer director should believe in him?

It is extremely important that a director should have a faith in you and he should back you up. What happens is when you have written something, everybody starts giving you suggestions or pointing out flaws from there angle. People think that they can speak so they can write as well. Rather than writing they prefer to make amendments to the already written scripts. Just because I can switch on a table fan does not mean that I can give suggestion for lighting to my cameraman. Film making is an open art. When I write a scene, it gets presented in various different departments, now anybody from these departments start suggestions or worse, starts pointing out flaws, writer will be damned. Hence it is very important that a director should have a firm stand on whatever writer has written. If he starts questioning the writer after finalizing the script or while shooting, then everything goes for a toss. I have learnt this lesson in a hard way. Even if I get a hint that producer or director does not have faith in me, I prefer to stay away from such project. I don’t have to prove myself to each and everybody everytime. If you trust me, we can have a good working relationship otherwise, Tata Bya Bye.

Do you have any ritual for writing? Like a special chair or time of the day something like that?

There is only one ritual for me – meeting the deadline. I have to just finish my work before deadline. Other than that, I don’t care at what time I am writing or on which chair I am using. There has to be some mess around me. I like to keep my screenwriting books nearby. Some music and snacks like Chivada, farsan also should be handy. I also like to have some dictionaries around me. I like Read between writing, I prefer Marathi poems when I am writing in Marathi. I don’t type on laptop. I like to write by hand on the journal books where left hand side black page is for diagrams, notes and remakes and right hand side for actual writing.

Other than films what else do you write?

I write poems in Marathi. Several poems have been published in various Diwali Ank. Artiste Sanjay Pawar has created some artwork based on my poems and exhibited it. I have written a play, and I also have written critical reviews. Now it is just a film and poems. My collection of poems will be published very soon.

Bollywood is a male dominated industry. Any bitter experiences in this industry!

I have always worked with top-class actors and production houses, so I do not have any bad experiences. The problem comes with a line of actors who are not stars but think too much about themselves. I remember an incident when a certain artiste was changing my lines. I was shocked by this. I went and told this actor, I don’t mind you changing lines, but you are changing the entire screenplay with these changes. Please don’t do this.  Other than this small incident, every other actor has made my writing spectacular on screen.

Would you be directing in the near future?

Yes, this is definitely on the cards. I am writing screenplay for my directorial venture.

Writers are always sidelines in credits.

I actually don’t like when people do not even mention writer’s name while giving credits. Also, most reviewers tend to write only about directors and stars of the film. They should point out how the film has been written and whether it is good or bad, the writers should be mentioned. This way, our industry will more focus on the content and will provide good platform for experimentation in writing.

Manisha, we wish you best luck for your future films and thanks a lot for speaking with us about your journey as a writer.