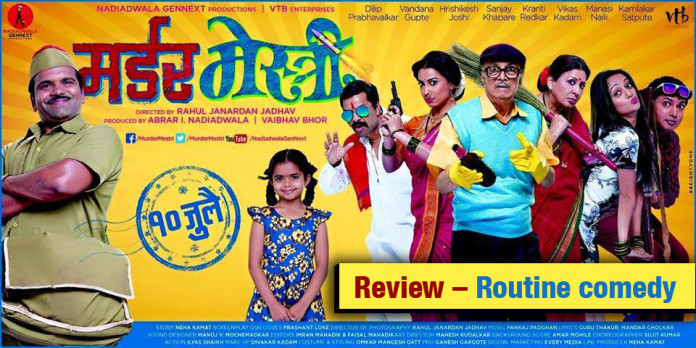 Director Rahul Jadhav’s Murder Mestri is a routine comedy born out of a misunderstanding. In other words, it doesn’t fall in the very good category but at the same time there is no harm in savoring it once. Some pleasing visuals of the interiors of Konkan also help the cause.

The film revolves around the postman Prabhakar (Hrishikesh Joshi), who stays in Sawantwadi (Konkan) with his wife and daughter. Prabhakar reads people’s letters when he runs out of bedtime stories for his daughter. Slowly, it becomes an obsessive habit. Once, things go out of control and he gets beaten up for his act. Prabhakar vows not to read anybody else’s letters again. But he is unable to control the urge. 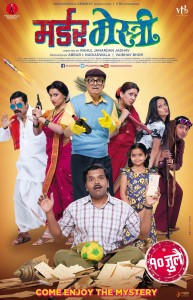 He stumbles upon a letter and gets a shock through its contents. A person named Madhav Mestri is going to be murdered by his wife. Prabhakar is desperate to save Mestri’s life. But he comes to know that there are three Madhav Mestris (Dilip Prabhavalkar, Sanjay Khapre and Vikas Kadam) in Sawantwadi and all of them are married. How will Prabhakar save Madhav Mestri?

Murder Mestri is a light-hearted, easy watch for the entire family(except for a couple of sequences featuring Mansi Naik and Vikas Kadam). The fast pace and taut length with something or the other to at least giggle makes the film a one-time watch. The manner in which the basic plot is established is also praiseworthy.

But the film falls in the ‘routine comedy’ category due to various reasons. Most of the times, the comedy is loud and over-the-top. It looks as if the actors are overdoing things to make you laugh. Murder Mestri would have achieved a lot more had this point being taken care of. Last year, Poshter Boyz, also a comedy of misunderstanding, managed to create a strong impact since the comedy was well-handled. Apart from this, the film suffers from some flaws and a stretched second half. 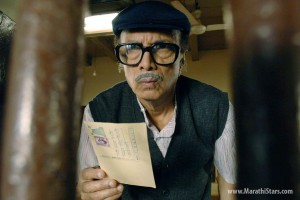 This is yet another Marathi film with some delightful locales of the interiors of Konkan. Jadhav has captured the scenery earnestly. There is not much scope for music and the few songs that are included aren’t much appealing. Although a particular editing effect is overused while joining two scenes, it is certainly eye-pleasing.

The performances are laudable but, as mentioned before, making the actors try too hard wasn’t a good idea. Hrishikesh Joshi once again provides a mature act. Dilip Prabhavalkar, the experienced veteran, once again delivers, which isn’t surprising. Vikas Kadam is average. Kranti Redkar and Vandana Gupte manage well in difficult roles. Sanjay Khapre, Manasi Naik and the actress playing Prabhakar’s wife play their parts well but you can’t ignore them over-trying.

Murder Mestri is an average, one-time watch comedy. The film would have had more chances of earning well if it had not released alongside a biggie like Bahubali.