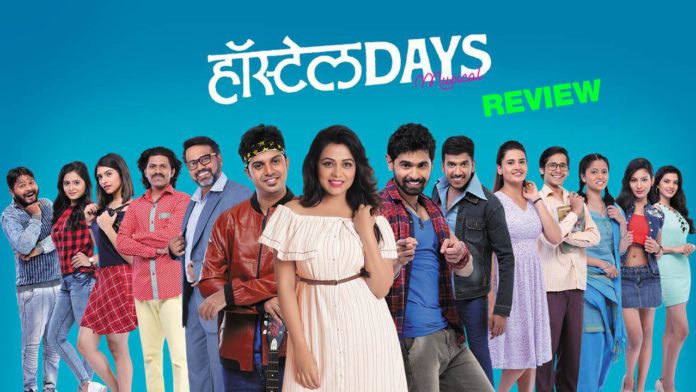 If someone would have asked me which is the safest scenario to set a film in (before watching ‘Hostel Days’) I might have answered ‘a hostel’. But now I definitely won’t. ‘Hostel Days’ is a revelation of sorts in taking this genre, the overall Marathi cinema, & the ‘musical’ genre altogether to a new low! The film is life threateningly 2 & a half hours long! But the main conflict arrives in the last 45 minutes or so. But does it mean at least then the film becomes marginally interesting? No!

Normally when a film has a hostel scenario it’s mostly secondary or a by product of the college scenario. Yes there could be other exceptions too, but then those films justify why the film is only about hostel life! ‘Hostel Days’ tries to figure out the same throughout the film. As said earlier the actual conflict arrives much late but before that the film relies on a cardboard cutout love triangle between Aroh Welankar, Prarthana Behere & a much younger looking Virajas Kulkarni. Then there are also few other characters in which Akshay Tanksale has been given more footage. Tanksale as ‘Buchchan’ plays an Amitabh Bachchan fan for a silly reason revealed later in the film. He is also the narrator of the film, where he speaks too much but actually has very little to say. Sanjay Jadhav as ‘KuKu’ (Kumar Kulkarni) is said to be the rector of the hostel & along with his wife together they both represent the entire teaching or administrating staff of the whole college!

But then the film keeps avoiding the term ‘college’. Instead it constantly tries to convince us that it’s about the ‘hostel’. Not a single character appeals to us. Akshay Tanksale tries too hard with his usual antics but ends up making no sense. Aroh Welankar looks the part of a tough guy, the hostel GS ‘Shiva’, but delivers his dialogue with utter innocence of a studious teenager. Virajas Kulkarni as ‘Jay Dharmadhikari’ a rich spoilt brat is the exact opposite where he forcefully plays a villain while looking like a just passed out 10th grade student. Jay and his gang of friends from Mumbai & other cities who are now in a small village hostel are clearly a version of Shekhar Malhotra and his gang from ‘Jo Jeeta Wohi Sikander’!

The film has around 8 songs or so. None of them is memorable. Technically the film isn’t really bad but it’s like a body without a soul. The soul of ‘Hostel Days’ is merely a collection of a few gags, usual college film clichés & a melodrama about the rich vs poor, the corrupt vs the honest, hardworking. ‘Hostel Days’ calls itself a film about hostel life but doesn’t really get what exactly it is. It uses a hostel the way an older film used the slums, where the residents strive to save their homes from the builder mafia!

The only positive is that Sanjay Jadhav comes out as a decent minimalist character actor out of this film. But again it’s also because other actors are either trying too hard or not trying at all in their respective roles. ‘Hostel Days’ biggest issue is it’s length of around 2 & a Half hours. Had that been curbed by around 40-45 minutes this film might have entertained at least some audiences.

We definitely deserve a lot better film about hostel life that can make an ex-hostelite nostalgic & others excited about it. ‘Hostel Days’ only manages to be a terribly tasteless clichéd ‘film’ that actually abuses the purity of hostel life. It definitely affected my personal memories of my ‘Hostel Days’, not in a nostalgic way.