He had impeccable comic timing. He has amazing dilogue delivery. He knew camera loved him. Audience loved his antics on the screen. The huge talent once stormed entire Maharashtra with his films. Audience loved not only his comic roles, but also serious roles as well. He was Laxmikant Berde, more fondly remembered as Lakshya by his fans.

He started his career with megablock buster play “Toortoor”. This followed with many hit plays. Shanteche karte chaaloo aahe was one of the mile-stone in the Marathi theatre. His film career started with a moderate hit “Hasle tar fasli” However, Mahesh Kothare’s Dhoom Dhadaka defined him. He gave a complete turn to entire Marathi cinema. Roles were written for him.

Laxmikant Berde was a comman man’s hero. His typical famous dialogue delivery is still mimicked by many upcoming stars.

Ruhi Berde, his first wife supported him a lot in his struggling period. After her untimely demise, he married Priya Arun- his costar in many films. There on-screen chemistry was always sizzling.
However, his onscreen best partner was Ashok Saraf . Together they acted in more than 60 films. They rules box office single handed with the blockbusters like Ashi Hi Banwa Banwi, Dhoom Dhadaka, De Danadan, Balache Baap Brahmachari etc.

Lakshya’s most ambitious role was Ek Hota Vidooshak. He had put his soul into this film. However, audience rejected him in such role. The failure of this film was always a soft spot for him. On 16 December 2004, he bid adieu to this world. Marathi cinema has lost its Superstar.

Though, he is not amongst us today, his various films will always cherish in our minds and bring a smile on our lips. That’s what he wanted to be remembered as. 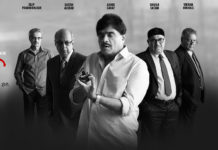