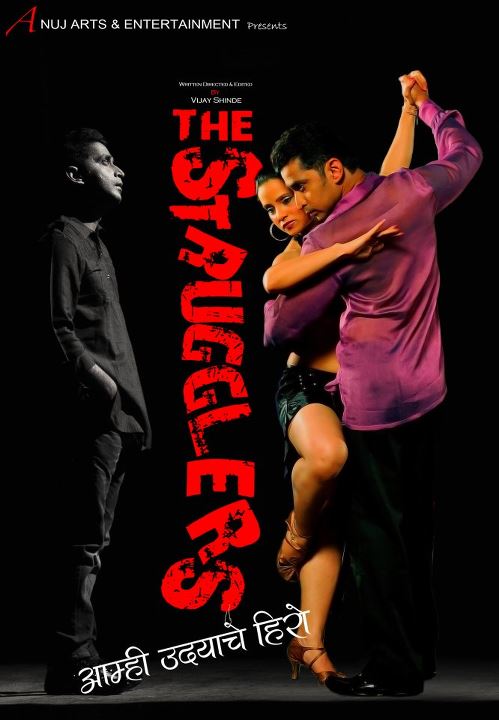 Story : Almost everyone has the fascination of Mumbai film industry, either it is Marathi or Hindi film industry. The glamorous attraction is same in both industries. This fascination gives a STRUGGLING start to the youth and the journey of dreams begins with endless hopes. Everyday hundreds of young Boys and Girls with the talent of Singing, Dancing, Acting, Modeling, Writing and with many other skills flow to the Mumbai film industry. These young Boys and Girls in filmy language are called STRUGGLERS. They always Struggle to meet Directors, Producers, and Casting Directors who can notice them for a single chance to show their talent.

Many of them are being then caught by the fake peoples in film industry with fake promises. We can see fake photographers offering modeling photo shoot packages as well as acting schools with high voltage admission fees. These photo shoots and acting schools offers them a chance of getting role in films & add films if they go through their packages, in real these Strugglers found no results but the waste of time and money. They get no entertainment by these photo shoots, acting schools and casting directors at the end and hence they are thrown in the darkness of frustrations where they found no way of getting ahead.These STRUGGLERS found no options rather than SUISIDE or COMPROMISE, and this is the dark side of reality in film industry.
The real side of talented Struggler suicides under frustration and Strugglers to the attraction side of glamorous film industry compromises. I think there is no need to explain what compromise means in film industry, still in short it means anything for anything.

The Strugglers coming out with compromise either he or she founds a very short and painful journey of film industry and always suffers in dirty side. These compromised Struggler faces a glamorous side on the front called celebrity and a dirty life on the back fully controlled by another dirty celebrity. But the Struggler who conquers the frustration with power of patience and passion stands alone on his feet and this Struggling talent automatically gets noticed by real talent hunters. Even if they are not noticed they make their own way of success and the obstacles them self make a way for them to reach on the top.
This Struggle makes a success story of creating history and this history of Struggle inspired Director Vijay Shinde Writing this Marathi film named THE STRUGGLERS-AMHI UDYACHE HERO, on the back of many years struggling of his own experience in this film industry.

Vinayak who is Struggling with his Rangmanch group, a group of talented actors & artists, to create their own identity in theater by participating in different completions of dramas and other shows. Even after wining many competitions, this group finds no respectful appreciation of their talent. Day by day Vinayak Struggles with his talented group, who directs all the plays and dramas for his Rangmanch group.

One day in a deep frustration Vinayak understands that he have all the necessary talent available in his group with which he can dare to make a Marathi film, all they need is the Finance. Here the entire exited journey begins and the real Struggle of Vinayak and his army finds some good and bad experiences.

You see lots of funny things happening while the preparation of making film in the film and also Vinayak finds his Love. Vinayak with his Love is very happy as his dream is going to come true. But the Struggle is not over, a sudden storm scatters the entire group, also Vinayak loses his Love. Everything is finished all a sudden.
What happens with them which destroy everything? Can Vinayak manage to unite his Rangmanch group again? Will he meet back to his love? Was that the Struggle or this is the beginning of real Struggle?

Vijay Shinde, the Director & Writer of this film is succeeded to raise some real facts of film industry so sensitively that forces us to think a while.
Also the Lyrics of Sachin Awate and the Music of Anurag Godbole will force you to listen it again and again.

Let’s find out what happened with “THE STRUGGLERS – AMHI UDYACHE HERO”. A totally different Romantic Comedy Drama, which will definitely make you Cry while Laughing…!!!